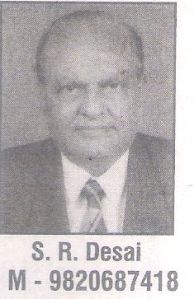 demolishing old structures and reconstructing new ones by availing incentives FSI/TDR benefits as available under provisions of various DC regulations.

To augment the process of redevelopment in MHADA layouts, Govt. modified provisions of DC regulation no 33(5) in Dec’2009 thereby enhancing the available FSI to 2.5 for all MHADA layouts vide Govt. GR no. TPB/4308/74/CR-11/2008/UD-11 Dtd. 6/12/2008 with certain terms and conditions. Two options were made available to avail of the benefits of additional FSI.

1. One involved payment of premium to MHADA in lieu of the additional built-up area and

For the first one and a half year MHADA decided to allow the societies in the suburbs to choose the option and approved several schemes of redevelopment. However on or about 19th Sept. 2010 MHADA decided to opt for the second option of sharing of built up area in the ratio 2:1.

MHADA decided to go in for second option apparently to increase its housing stock. Unfortunately the option of sharing of built up area is not an option which is commercially viable for the society’s and developers considering high cost of construction, development, approvals, interest as also requirement of tenants in terms of higher carpet area for which the whole exercise of amending the clause 33 (5) have been done in the past.

We appreciate that Govt. /MHADA aims to overcome its shortage of housing stock and thus has changed its policy. Government has brought this policy to create affordable housing stock. But it has been observed and checked in MHADA office that no proposals are being put up by societies and developers since September 2010 proposals under this changed policy are not at all commercial viable due to the reasons stated above. It is evident that this policy is not workable and has resulted in huge losses of revenue to MHADA.

Moreover the aim with which the policy is being implemented is not serving the purpose as no society is willing to opt for the sharing formula being commercially unviable. Therefore, the redevelopment projects in all MHADA layouts have come to a grinding halt after this policy is introduced bythe government.

In view of the above, the Government/MHADA is facing following losses on account of not workable and unfunctionable policy introduced by them.
1. They put the lakhs of lives of tenants in danger condition as most of MHADA buildings are in dilapidated condition as declared by the Corporation,

2. They have also lost the opportunity to generate about 1 lakh housing stock as Developers /Builders were in a position to construct and sale houses in the market.

3. They have lost revenue of Rs. about 1000/- crores towards selling of additional FSI on premium basis to the developers as per D.C. Regulation 33(5)2-C-(ii). The detail calculation of this amount is as follows :- 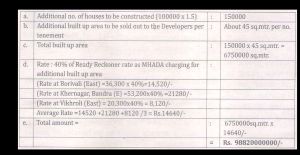 4. There is no time bound’ programme for redevelopment of said buildings. So that the progress of redevelopment projects are very slow. As such it is affecting on revenue for the government as well as development works.

In spite of this failure on their part, there is no check on department of V.P. of MHADA, Housing Secretary and Housing Minister of Maharashtra Government. Considering the facts, it is required to change this stand of 2:1 and adopt premium basis policy as per provisions of DC regulation 33 (5)2 -c-(ii) for redevelopment of M HADA housing colonies and generate finance for creating more affordable housing stock as required.

The task of taking up & completing redevelopment projects for old and dilapidated buildings and giving houses to the poor and needy people of existing MHADA layouts and to generate revenue for the MHADA is not difficult provided the practicable and workable policies are adopted by MHADA/Govt.

4 thoughts on “Redevelopment of MHADA Colonies”