Karthik Srinivasan, a Digital Marketer from Bangalore was going through his email when he discovered that HDFC Bank had been charging him Rs 100 per quarter for a program he never signed up for.

On delving deeper, he discovered that the service was an opt-out program that had been activate for his account without his express consent. Worse still, the opting out requires a member to actually read their spam-like banking emails, from top to bottom, discover the fine print that states that the offer is an opt-out one and then click on a link to opt-out of the service.

@beastoftraal write to banking ombudsman, an opt out program is not permitted I think @kalyansury @HDFC_Bank@HDFCBank_Cares

@MystiqueWanderr Planning to. Meanwhile, plan to tweet it *every single day* till end 2017 or till @HDFC_Bank apologizes to all. @kalyansury

But what’s Rs 400, right? That still doesn’t equate to hundreds of crores of rupees.

Rashmi R. Padhy took to Medium to break down why the money is real and why this is indeed a scam.

Pointing to VAS (Value-Added-Service) fraud that was prevalent some years ago, Padhy notes that telcos used to offer VAS as “free” trials. After the trial was over, these telcos would charge you for the service and keep doing so until you opted out.

The value of the transactions was small, but scaled up, the telcos likely earned in hundreds, if not thousands of crores. The rising number of complaints caught the Telecom Regulatory Authority of India’s (Trai) attention and the practice was halted.

Day 17: I’m not tired @HDFC_Bank! Just very disappointed. That a bank could be this brazen with customers’ money http://bit.ly/2jW2NeJ

HDFC Bank appears to be doing the same thing. The bank essentially upgrades you to a free Classic / Preferred Banking trial program without your consent and then charges you Rs 100 — plus service tax — per quarter till you opt out.

Since most people would not read the mailer that explains all this and since the price isn’t placed up front, most people will not opt-out because they simply don’t know.

Padhy breaks down the calculations as follows. Charging 1.2 Cr customers a fee of Rs 400 a year, HDFC is set to earn upwards of Rs 400 Cr a year. For free, without the explicit consent of its members.

The calculation may not be as cut and dried as Padhy puts it and the numbers might be much lower. This doesn’t, however, change the fact that the program is inherently fraudulent. And other banks might soon follow suit, if they haven’t already.

As heinous as the practice might seem, it is currently perfectly legal for it to do what it’s doing.

Day 49: Invite-only, they said.
You’ll be charged, they said.
‘Here’s opt-out link’, they hid in email.
If not…! http://bit.ly/UnethicalHDFC

Day 50: Thank you for this @OfficeChai. For the 50th time, could you please do the right thing, @HDFC_Bank? http://bit.ly/2nGeeum  pic.twitter.com/euk7nuMgpl 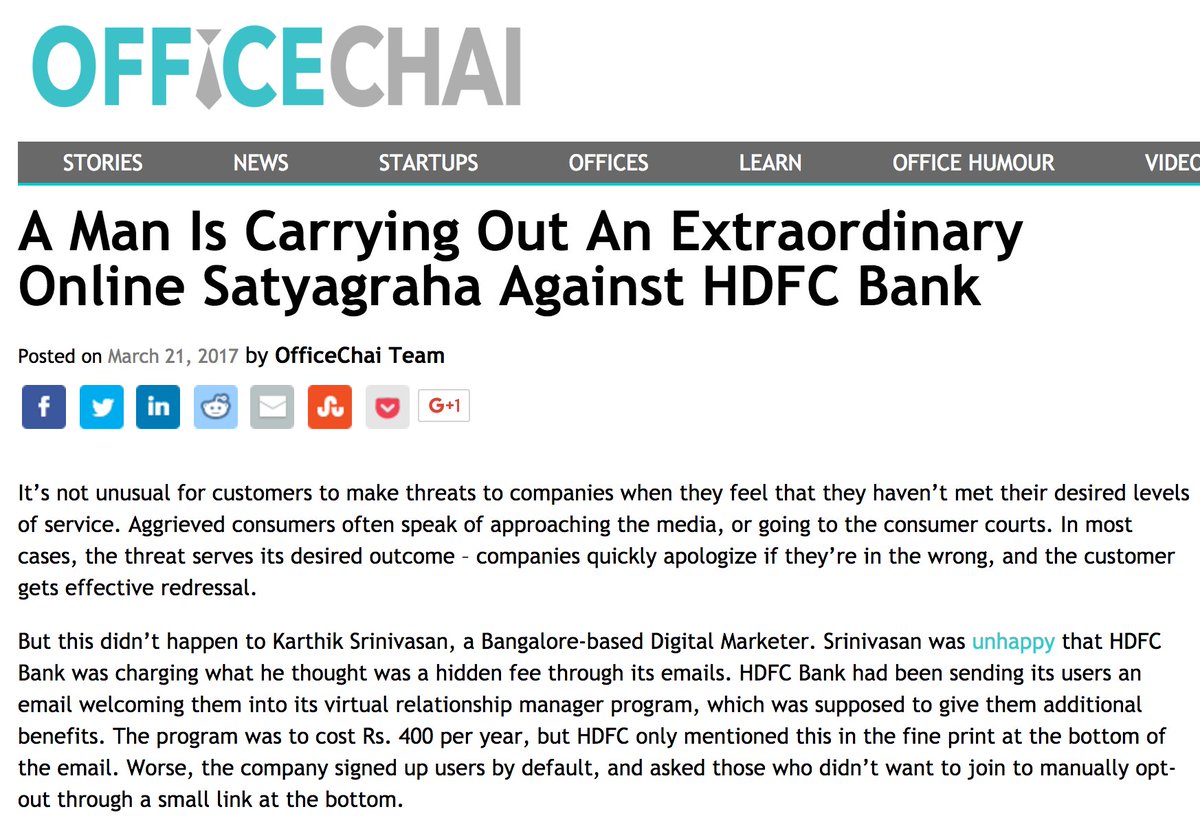 Most people may not even be aware of the service or the charge. A charge of Rs 400 a year can easily get lost in the tens of thousands of transactions that we perform every year. And how many of us actually peruse through our monthly bank statements in that much detail anyway? Many more of us probably delete bank mails the moment they arrive in the first place.

Srinivasan did not take this charge laying down. On discovering the charge, an average person might simply have opted out, vented a bit on social media and left it at that. Srinivasan is, however made of more Gandhian stuff. As Office Chai puts it, Srinivasan is now on an online ‘satyagraha’ to get HDFC Bank to apologise for trying to scam its customers in such a way.

“Tuberculosis is Ebola with wings. It does not differentiate between the driver in the front of the Mercedes to the CEO in the back or between the maid in the kitchen and the memsahib in the living room. It kills an Indian every minute.”

As a lead up to World Tuberculosis Day, TED has released India’s first Ted Talk on TB by Zarir F Udwadia, a leading chest physician from Hinduja Hospital, Mumbai.

One indian dies of this disease every minute. Dr. Zarir Udwadia shares the story of the suffering of one patient diagnosed with Totally Drug Resistant -Tuberculosis (TDR-TB). And unfortunately,succumbing to it.

If a property-owner is getting a rent of more than Rs50,000 per month (pm), then the rent-payer is required to deduct tax at source (TDS) @5%. It will create a trail for the income-tax (I-T) department to ensure that the property-owner has shown the rent in her/ his tax returns and has paid the taxes. Anyone earning more than Rs6 lakh a year as rental income must declare it in the tax returns; but people find ways to circumvent it. Hence, a new Section,194-I B, has been introduced in Budget 2017. The proposed change is effective 1 June 2017.
To make for easier compliance, it is proposed that the rent-payer need not obtain a TAN (tax deduction and collection account number) and is required to deduct the tax only once in a financial year. The TDS has to be deposited through a challan-cum-statement, for which the PAN of the property-owner is needed. The tenant is not required to file a separate TDS return for this purpose.
It has also been proposed that “tax shall be deducted on such income at the time of credit of rent, for the last month of the previous year, or the last month of tenancy if the property is vacated during the year, to the account of the payee, or at the time of payment thereof in cash or by issue of a cheque or draft or by any other mode, whichever is earlier.”
For example, if you are paying a rent of Rs55,000 per month, payment of the rent for March 2018 will need deduction of 5% TDS on the total rent paid for FY17-18. TDS will be 5% of Rs55,000 for 12 months, i.e., Rs33,000. It is to be deposited with the I-T department. So, for the March 2018 rent, you pay the property-owner Rs55,000 minus Rs33,000, that is Rs22,000. If you vacate the place before March 2018, you will deduct the 5% TDS during the last month of your rent payment.
If you are a property-owner who shows the rental income in your tax returns, you don’t have to worry. Property-owners can take credit of TDS against their total tax due while filing tax returns. However,  anyone getting a rent of over Rs6 lakh a year but unwilling to show it in tax returns, is asking for trouble. According to the existing laws, any renter who claims tax exemption under HRA will have to furnish the PAN of the property-owner if the annual rent exceeds Rs1 lakh. Moreover, the data will be available at the time of stamp duty/lease registration. Those who receive rental income need to properly report the income as the I-T department can easily find this information.
http://www.moneylife.in/article/5-percentage-tds-if-rent-over-rs50000pm/49970.html
Loading Comments...