The BMC has failed and neglected to collect Rs.1000cr. plus amount in property tax. In this connection Watchdog Foundation has written letters to:
1) Comptroller Auditor General of India- to investigate loss to BMC on account of non levy of property tax on slum dwellers dispite signing agreement in 2006 between BMC, State Government and Government of India.
( PLEASE SEE THE REPLY RECEIVED FROM CAG DATED 25TH JULY 2013DIRECTING THE PRINCIPAL ACCOUNTANT GENERAL MAHARASHTRA TO EXAMINE THE MATTER AND SUBMIT REPORT TO CAG.)
2) Mission Director, Jawaharlal Nehru National Urban Renewal Mission- to discontinue grant to BMC for their failure to introduce mandatory property tax reforms as agreed in the aforesaid agreement signed in 2006.
3) Municipal Commissioner, BMC, Municipal Chief Auditior, Assessor and Collector and others for loss of revenue to BMC.
4) We have also filed RTI applications with aforesaid authorities seeking details of the action taken by them.
It is relevant to state that the Municipal Corporations of Delhi,Chennai, Banglore, Kolkatta, etc. are charging property tax to the slums / jhuggis / zopadis then why BMC dispite signing agreement in 2006 is not collecting property tax. This amounts to deliberate and intentional ommission on the part of MC and others of BMC to recover the said property tax. As such we demand that thisloss occuring to BMC due to the neglect of MC and others should be recovered from their salaries.
The BMC has threatned to recover the property tax that is due with 24% p.a. interest from tax payers. Our question to BMC is that they should first recover
a) Rs.143 Cr. from railways, which it has not paid in taxes for last 15 years
b) Similar or more amount is also to be recovered from State Government
c) The builders owe Rs.628 Cr. out of which only Rs.8 Cr. has been paid. As such is the BMC going to recover Rs.620 Cr. with 24% interest from the builders (seeattached news report).
PLEASE CIRCULATE THIS AMONGST YOUR FRIENDS AND RELATIVES AND TAXPAYERS TO CREATE MASS AWARENESS.
regards
For Watchdog Foundation
Nicholas Almeida/Godfrey Pimenta (gpimenta@rediffmail.com) 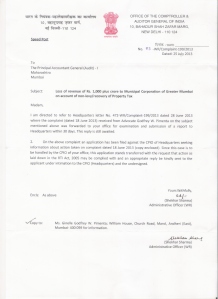